Kyren Wilson completed a 13-9 victory over Martin Gould to reach the quarter-finals of the Betfred World Championship for a fifth consecutive year. 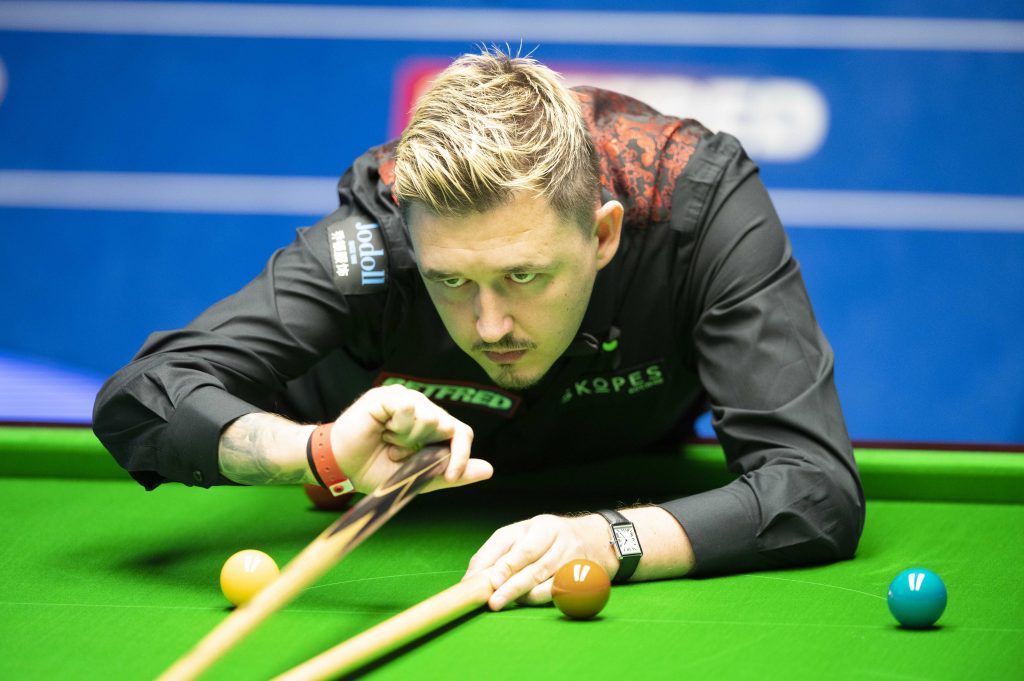 Wilson led 11-5 going into the concluding session then had some anxious moments as Gould recovered to 11-8. The session turned in frame 20 when Wilson got the three games of snooker he needed and cleared for 12-8 – a moment which effectively ended Gould’s resistance. Over the match, Wilson made two centuries and ten more breaks over 50.

The Kettering cueman’s reward is a meeting with defending champion Judd Trump on Monday and Tuesday. It will be a first Crucible clash between two of snooker’s finest young talents. Their last match was at the Gibraltar Open final in March when Trump won 4-3 to land his sixth ranking title of the season.

Since he first reached the quarter-finals in 2016, Wilson has shown a high level of consistency at the Crucible, getting to the same stage every year since, and going one step further to the semi-finals in 2018. After a fine performance against Gould, the 28-year-old will relish the chance to end Trump’s reign.

Qualifier Gould took the first frame today with a break of 58 and the second in two scoring visits. Wilson made 52 in the next but couldn’t seal the frame and his opponent took it with a 49 clearance to close to 11-8.

Gould looked certain to reduce the deficit further until he missed a red with the rest to a top corner at 68-0. Wilson trailed by 46 points on the last red, then got one snooker and laid another. Calamity struck for Gould as he missed the red, hit the black and left a free ball, allowing Wilson to clear with 41.

Gould pulled one more back after the interval with a run of 73 for 12-9, but when he missed a red to a centre pocket on 12 in frame 22, it proved his last shot as Wilson wrapped up victory with a break of 79.

“The frame to go 12-8 was so important,” said Wilson. “They are the frames where you find out whether you are sharp enough to take out that clearance. I was very pleased to steady myself and do that. I remember being 11-5 up against Mark Allen here (in 2016) and he came back to 11-9, so when it went 11-8 today those horrible nightmares were flooding back.

“I felt too relaxed today, there were no nerves and I actually like to have a bit of adrenaline pumping because that’s when I produce my best snooker. At 11-5 I took my foot off the gas. Now I’m in the quarter-finals and if you can’t get up for that there’s something wrong with you.

“I use Judd as a benchmark and I want to achieve what he has done. It makes me ask myself what I have to do to get there, and obviously one of those things is to beat players like him. You have to beat the best players to win the big events.”

On losing the crucial 20th frame from ahead, Gould said: “It’s not the first time and not the last time you will see a frame lost from that position. I just had to take it on the chin and try to get back into the game again. I did and made a good break to go 12-9, but he made a good break in the last. The damage was done yesterday, I didn’t really turn up and didn’t really get into the game. I’m pleased with the effort that I put in today.

“As I’ve said before, if this had been played in April, then I wouldn’t be sat here right now. There are a huge amount of positives to take from it. I will look forward to the Championship League. I’ll probably get the golf clubs back out, enjoy some of the weather and then hit the practice table to get ready for the new season.”